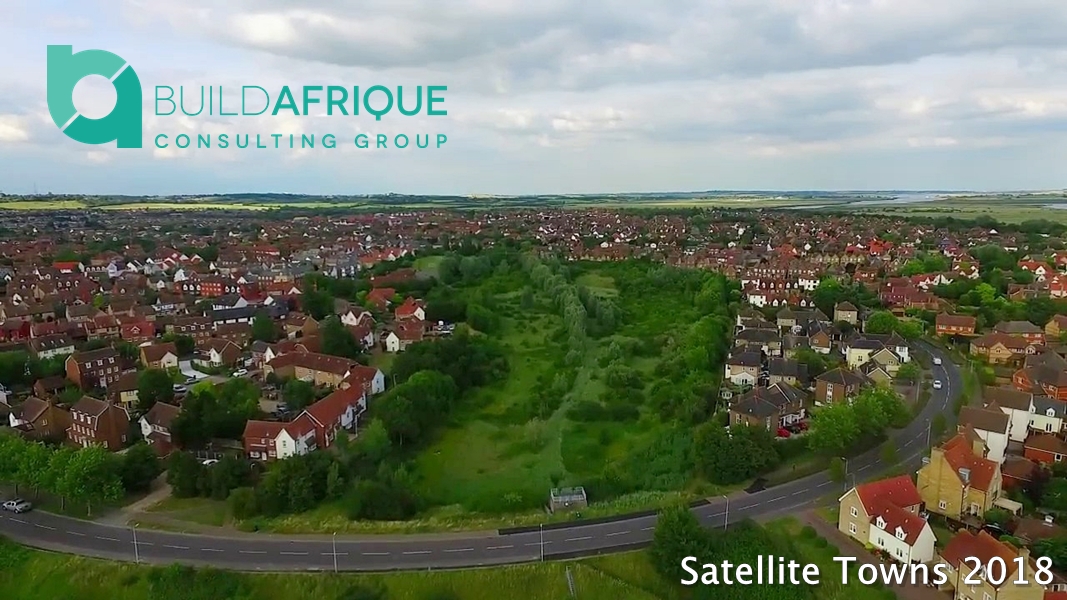 Ngong town’s growth can be traced back to the 1990 recession when people from government institutions in Nairobi moved there after the government stopped providing housing for them. Low land prices and the existence of a serene environment, coupled with relatively minimal noise pollution further sparked the growth of Ngong area, and in the last five years alone, the town has undergone rapid transformation with the construction of commercial property, residential flats, and supermarkets, and schools. The PCEA church changed the narrative of Ngong town with the development of the first commercial building, Milele Mall. The property sits on a 4.25 ha of land and anchors major country brands such as Tuskys Supermarket, I & M bank, Chase Bank, AAR Medical Centre, and Innscor. The two-story building has a total of 200 parking bays. Soon after its completion, the Ngong Business Arcade, which provides 21000 square feet of space was built. The town, which recently got a modern bus termal has set up plans to build a market to rid the town center of hawkers. While the southern bypass has indeed drawn investors to the town, the ongoing dualling of Ngong Road from Upperhill and the SGR which is expected to pass through Ngong are other factors driving the human influx to the area. In hospitality, The Sultan Gardens, a 3-star hotel, is the only establishment offering hospitality services to international and local tourists visiting the spectacular Ololuua Nature Trail and the Ngong Hills. As the town grows into the Kajiado business hub, there are numerous investment opportunities for real estate property and service investors. Such include hospitals, hotels, shopping malls, and more residential flats to cater for the growing population.

For the past three years, Ruiru has recorded one of the highest land appreciation among Nairobi’s satellite towns. In the third quarter of 2016, Ruiru land prices stood at Ksh 21.3 million per acre. Today, the asking price has risen by

12.7 percent to Ksh 24 million per acre. Land appreciation in Ruiru has been attributed to improved infrastructure particularly the Thika Super Highway and the commuter railway. Ruiru, which is one of Nairobi’s bedroom communities, is gradually transforming into an industrial town with the construction of Tatu and Life Industrial Parks. Tatu, which comprises of 457 acres of serviced land for industrial, assembly, warehouse, and logistics use has attracted manufacturing and processing investors such as Dormans Coffee, Chandaria Industries, KimFay and Bidco Oil Refineries. Bidco Oil, which is set to build four factories at the Bidco Oil Industrial Park in Ruiru is expected to create more than 2000 direct jobs within the park and 200000 more within the company’s eco-system which expands to its Thika headquarters. It is such aggressive investment in manufacturing that has attracted residential real estate investors into Ruiru town who predict an increased demand for housing and ancillary amenities. In mid-2017, Cytonn Investments broke ground on its mixed-use project in Ruiru. Dubbed RiverRun, the development comprises of 1258 residential units among which 600 will be townhouses and villas while the remaining units will be apartments. At the cost of $145 million, the project will accommodate all buyer profiles from lower income to high-income earners. The development is located 7km from Thika and provides easy access to Tatu City and other industrial parks within the constituency. Another project which broke ground in Ruiru is Lifestyle Heights by Lifestyle Estates Company. The Ksh 3.5 billion estate sits on a 50-acre parcel of land and comprises of 450 high-end apartments. The project is set to be complete by the end of 2018. Ruiru provides various investment opportunities for real estate investors. Unlike other satellite towns within the Kiambu metropolis, amenities such as sewerage, water, and electricity have been improved following the investment surge in the area which began soon after the completion of Thika Super Highway. The town, which provides a gateway to Kiambu’s serenity and Nairobi’s economic bustle, is suitable for both income producing and non-income producing real estate investments. Additionally, senior housing may be a viable investment choice as the area’s population demographic includes a sizeable number of the elderly.

Investors continue to flood Mavoko in Machakos County, a move that continues to cement the county as a hotbed for real estate investments. Top among the investors include Chinese firm Erdmann Property Limited which plans to build an industrial park comprising of 53 godowns and an office block. This is the second industrial park the company is expected to open in Mavoko after the 2009 Erdmann Industrial Park B, which comprises of 24 units of

godowns. Major challenges which previously crippled the constituency and the general Machakos County have been dealt with over the last five years, a factor which has gradually drawn real estate investors and manufacturers into the town. Such include water supply which was alleviated by the construction of the KIMC dam. Additionally, the constituency is currently set up for the development of the proposed Ndarugu1 dam (Nairobi-Mavoko-Kitengela) and the Ongata Rongai, Ngong and Mavoko Sewerage projects. The African Development Fund will fund the sewer project, which is expected to serve a population of 750000. In the production of construction materials, China Wu Yi Construction Company is the first to set base in Kenya. The firm, which is expected to start operations in March this year will be Kenya’s first building material supermarket in Kenya and will produce precast components such as wall panels, staircases, lift shafts, foundation piles, and hollow core slabs among others. After injecting Ksh 10 billion into the project, the Mavoko based company is betting on the increased acceptance of prefabricated homes by Kenyan home buyers. The company’s complex, which occupies a 30 acre piece of land is expected to create employment to 800 locals to its current 530 upon completion, and more after the company begins full manufacturing activities in Kenya. Another significant activity in construction is the government’s project that is expected to create 8000 low-cost homes on a 55-acre piece of land in Mavoko. The development, as part of GOK’s 1 billion low cost homes aims to eliminate slums in the constituency. Mavoko will be the constituency to watch as investors, the private and public sector, deluge the area to provide housing facilities for the growing industrial hub. As Superior Homes begins on its fifth phase of its Athi River Green Park estate, it is certain that Machakos County is the focus real estate investments. Opportunities to invest in include retail, industrial and residential spaces. As the home of low-cost building technology in Kenya, developers and buyers in Mavoko stand to make considerable amounts of savings.

The housing sector in Meru has in the recent past been in the spotlight for its growth. The town, which occupies a unique place in the eastern and the upper eastern Kenya trade circuit has seen rapid development in both the CBD and neighboring towns such as Makutano Township. This is attributed to the town’s vibrant higher education sector, banking & insurance, and agri-business. Also, the county’s position in the Lamu Port South Sudan Ethiopia Corridor (LAPPSET) has attracted investors. In support of the county’s transformation and massive growth in the CBD, investors are putting up amenities in towns such as Kithoka, Kinoru, Mulanthankari, Mwileria and Angaine to meet the soaring demand for student housing, residential property and meeting conference halls. One notable structure is the Green-Wood Development by Fusion D-Reit which sits at the edge of Meru town. The mix use development consists of a 160000 square feet mall, 53 executive apartments, and a 6 –floor grade A offices. The holistic project provides the live, work and play setting as it incorporates natural open spaces for playgrounds, commercial and retail space.  Another prominent structure is Sara Plaza located in Meru CBD. The building boasts a number of modern features including environmentally friendly glass-paneling which allows for natural lighting, basement parking, grade A office spaces and penthouse offices. The 7-storey building is also the tallest in the town. There have been plans proposed to grow the construction sector in Meru. Such include Meru Rising Towers and Kithoka Paradise. The Meru Rising Towers, which was initiated in 2016 is yet to be completed. However, the 350000 square feet building, which is equity funded will eliminate the acute shortage of commercial spaces in the county. Kithoka Paradise is estimated to cost Ksh 300 million. The development, which is located in the outskirts of Meru town will occupy 25 acres of land and will provide amenities such as shopping malls, schools, and residential property. For investors looking to invest in the county, the northern region of the county has been cited to be a suitable investment location. This is attributed to the fact that the district neighbours the Isiolo International Airport. Also worth to note is the incentive being provided by the county government of Meru on long-term leases on land for development.

Improved infrastructure and resurgence of various economic activities in Eldoret has placed the town as one of the major investments locations in Kenya. The town, which for a long time, has served as the regional hub for the North Rift Economic bloc (Noreb) is set to have a Ksh 200 billion industrial park. The project, dubbed AEZ Pearl River Industrial Park occupies 1700 acres in the plateau area of Eldoret in Keses Sub County and is the first privately

owned special economic zone in Kenya. The project, which is the first of its kind in East Africa, is expected to create more than 40000 direct jobs and 150000 indirect jobs upon completion. While the project is intent on manufacturing, agro-processing, and pharmaceuticals, 1000 acres of land have been set aside for the construction of Olympia City, which will provide amenities such as shopping malls, and 4000 residential blocks thus delivering the live, work & play concept whose popularity continues to grow in Kenya. AEZ Pearl River will be completed in three phases over the next ten years, with the first one been the industrial park, then a science & technology hub, followed by Olympia City. Another notable construction activity is the Eldoret-Juba highway project which upon completion is estimated to handle up to 90 percent of cargo traffic on the northern corridor thus opening up of the North Rift region further. While these are some of the major projects ongoing in Eldoret, institutional investors have not been left behind. The completion of the Moi University Pension Scheme Plaza along Uganda Road has attracted various brands into town with it’s grade- A offices. The 26-storey twin-tower sky scrapper is currently the tallest and most prominent building west of Nairobi. Opportunities available for investors are extensive given the town’s limited supply of grade A offices, recreational amenities and residential property for the 5million population of Uasin Gishu County. However, proper due diligence will play a part in maximizing returns given the current predicament of the town’s urban planning law, a problem that has been facing many counties in the wake of devolution.

Satellite towns continue to demonstrate their potential for growth and ability to develop into independent commercial hubs. Such is Eldoret town in Uasin Gishu County. While the list is not comprehensive, other towns to watch include Nakuru, Likoni, Mtwapa, Nyeri and Ruaka. Additionally, while some towns are in their initial stages of growth, some are well-established towns. Planning laws are specific to each town just like the investment opportunities. It is crucial that investors conduct feasibility studies before embarking on any real estate investment project so as to determine viability for different location or town, as well as engaging the services of real estate consultants.

Contact Us today for Solutions to your Challenge in Real Estate Investments and Project Development: